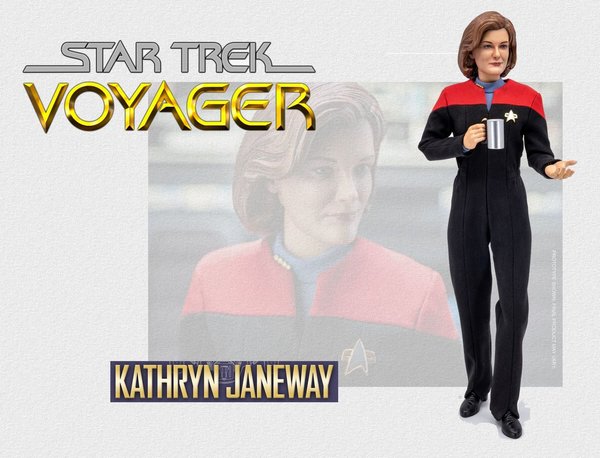 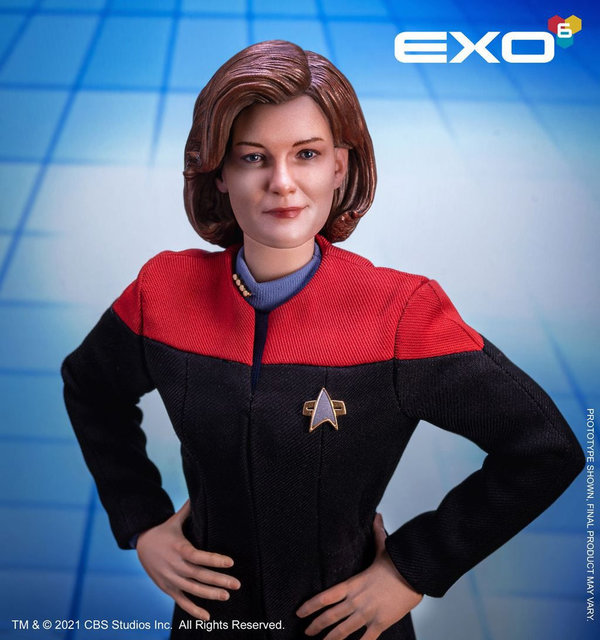 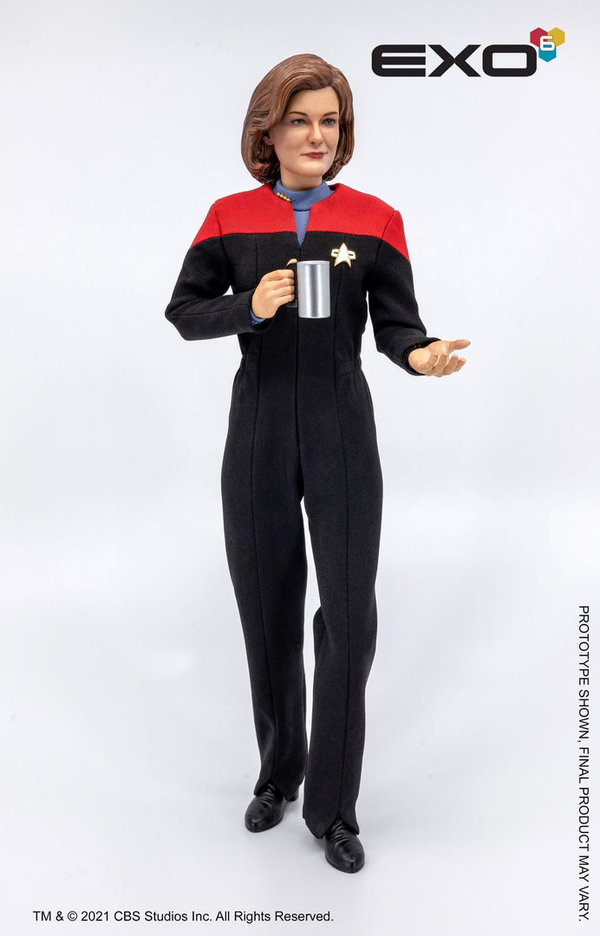 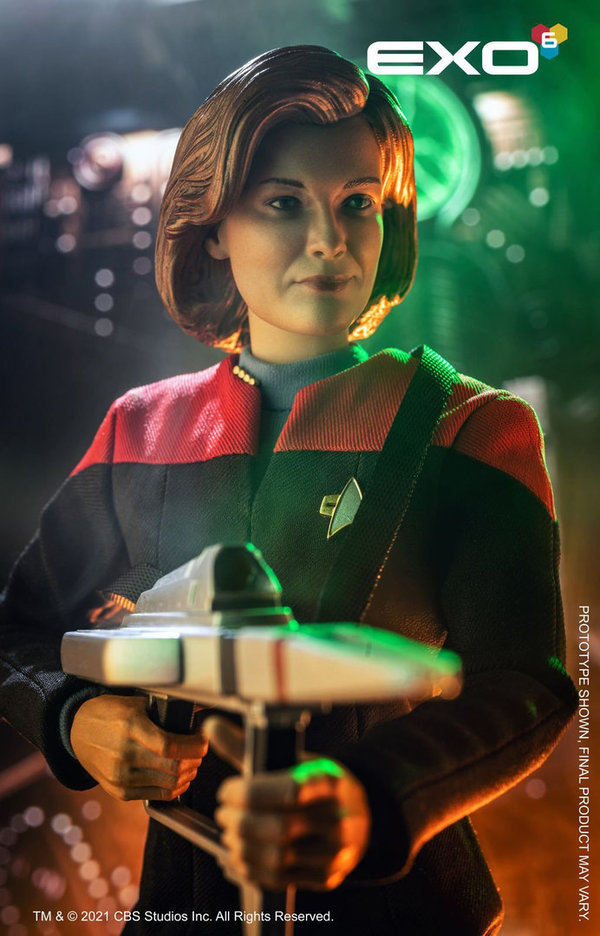 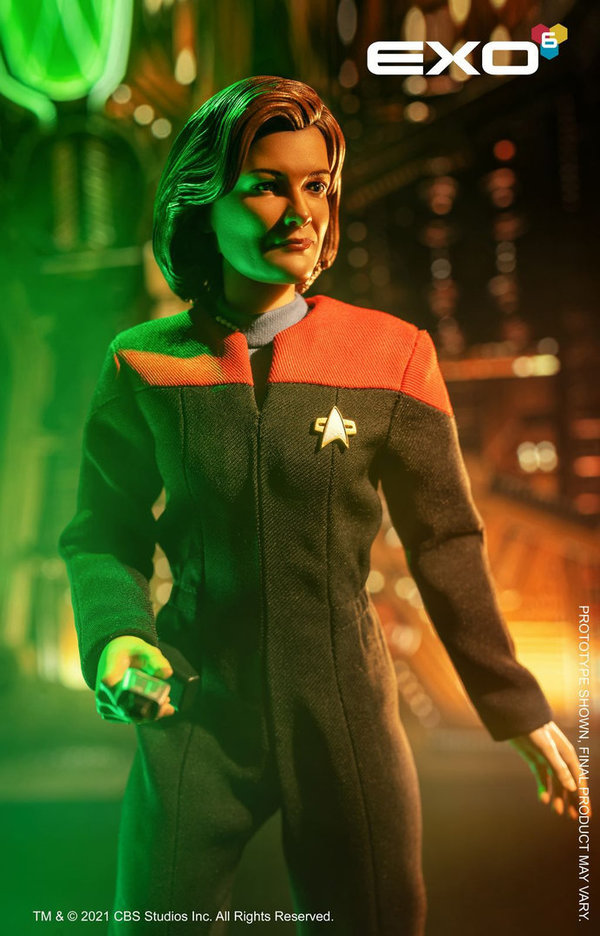 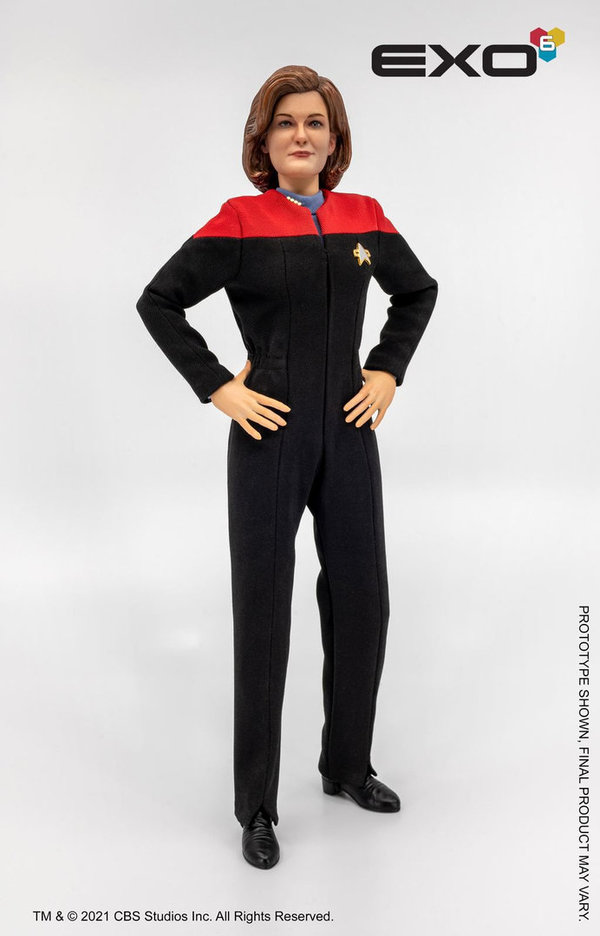 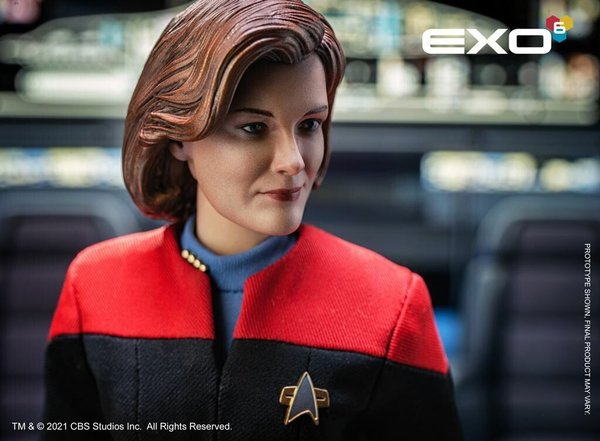 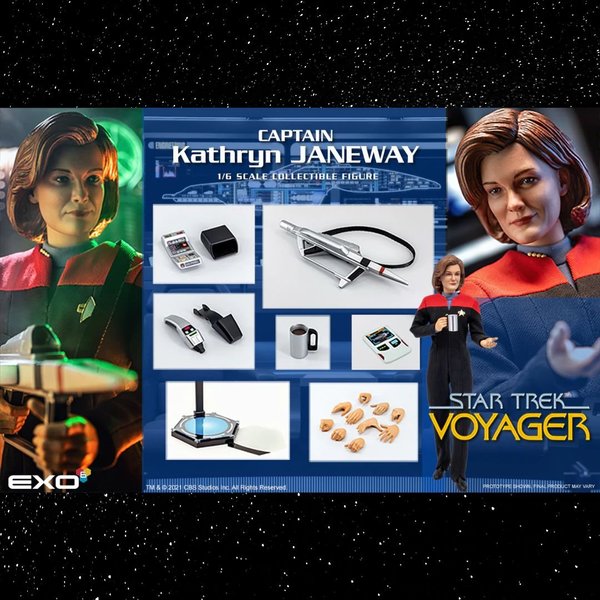 EXO-6 is proud to present anither 1:6 scale articulated figure from

'Abandon Ship? The answer's ‘no.’ I'm not breaking up the family.''

The first female captain to headline a Star Trek series, Kathryn Janeway shepherded the USS Voyager through the Borg-infested Delta Quadrant and safely returned her crew home after seven successful seasons. Janeway would not hesitate to defy Starfleet protocol and lead away missions herself, even into a Borg cube where she’d make sure she’s the last one out. She led her crew as a wise single parent, even guiding the holographic Doctor and the former Borg, Seven of Nine, into growing and learning what it meant to be human.

Kate Mulgrew’s portrayal of the brave and resourceful: yet warm and vulnerable captain endeared her to the millions of fans that cite Voyager as their favorite Star Trek series. As seen in the later seasons, Janeway is depicted with her traditional shoulder-length hair, and she has a bit of the sassiness that Mulgrew brought to the character.

This 1:6-scale figure re-creates this iconic character in exquisite 1:6 detail. Standing approximately 11 inches tall, every element, from her 24th century jumpsuit to her custom black boots, is authentically reproduced. The original portrait sculpt of Kate Mulgrew as Captain Janeway has an authentic, hand-painted likeness. The EXO-6 Janeway 1:6 Scale Articulated Figure includes:
- Fully Articulated Body: More than 30 points of articulation allow the figure to be displayed in multiple dynamic poses, approximately 30 cm tall.
- Realistic Portrait: Janeway’s portrait is lovingly rendered by top artists, with an excellent likeness of Kate Mulgrew in her role as Voyager’s captain. Each head sculpt is specially hand-painted.
- Starfleet Duty Uniform Jumpsuit: Meticulously researched, this duty uniform matches the pattern, and color of the original costume recreated in 1:6 scale. Magnets are sewn into the uniform so the holsters for the tricorder and phaser can be attached. An authentically scaled communicator badge is permanently affixed to the tunic.
- Boots: Soft plastic boots sculpted to match the cut and style of the original series footwear.
- Display Base: A hexagonal display base featuring the transporter pad will provide additional support for the figure. Two different inserts for the floor of the base can represent the transporter pad or the center of the transporter array. Equipment Captain Janeway is outfitted with everything needed for a Star Fleet officer. She comes equipped with:
- Type II hand phaser. The phaser can be worn in a black holster that magnetically attaches to the jumpsuit.
- TR-590 Tricorder X: This standard tricorder can be opened or worn in a holster.
- Phaser rifle: Compression Phaser rifle used by the Voyager crew.
- Coffee cup: ''Coffee, black.'' Kathryn couldn’t start her day without her signature beverage.This fine collectible figure is a perfect rendition of the best captain in the history of Starfleet and a great addition to your EXO-6 Star Trek 1:6-scale figure collection.