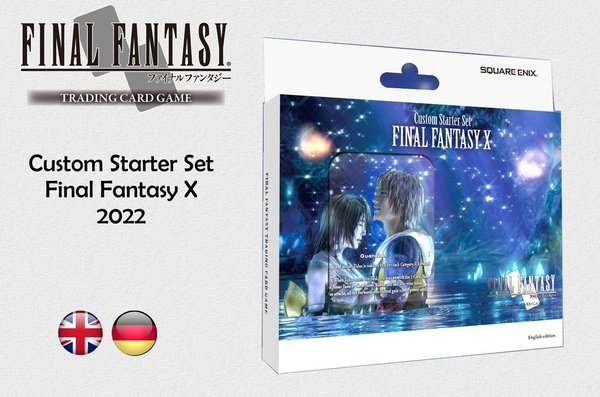 Introducing the first Starter Set of 2022: “Custom Starter Set FINAL FANTASY X”, a new type of starter set that consists of 1 [preconstructed] deck of 50 cards, and an additional 50 cards that can be used to customize the deck.

The initial deck (Wind element: 24 cards, Water element: 24 cards, Light element: 2 cards) is a Wind/Water deck, but it can easily be turned into a Fire/Water or Fire/Wind deck by swapping out the Wind or Water element cards with the 24 Fire element cards included with the additional cards available for customization. Aside from those, enclosed are 26 other cards that can be swapped with any other card, enabling players to create their very own customized deck.

Unlike the various “Two Player Starter Sets” that have been released thus far, this set only includes 1 deck, but it is a new type of Starter Set in which players can enjoy rearranging and creating their original deck, and also aims to generously support beginners as they encounter their initial hurdle of deck construction.