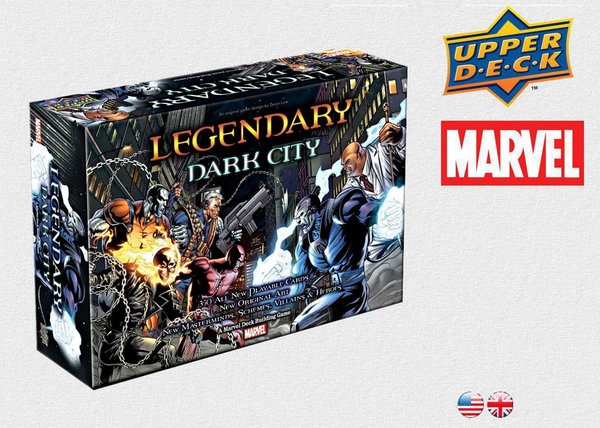 - New Expansion Features:
· Expansion consists of 350 all new playable cards, Color Rule sheet.
· All New cards consist of 17 heroes, 6 new villain groups, 5 new Masterminds & 2 new Henchmen!
· All original art featuring 4 pieces of unique art per hero!!
· This is not a stand alone prioduct, core set is required for gameplay
· New Bystander game mechanic.
- Players create their own powerful combos on the fly, combining their heroes’ awesome abilities to take down nasty Marvel Masterminds like Apocalypse and Kingpin.
- Over the course of the game, recruit increasingly powerful Hero cards to add to your deck, building a stronger and stronger deck of the ultimate Marvel superhero combinations.
- Easy to learn, with fast-paced gameplay.
- Features incredible original artwork of Marvel heroes and villains.
- Innovative “Mastermind” mechanics allow the game itself to fight back against the players: If players aren’t careful, villainous Marvel masterminds like Magneto, Loki, and Dr. Doom threaten to accomplish dark schemes and defeat all the players at once!
- Designed by award-winning game designer Devin Low, former Head Developer of Magic: The Gathering®.
- Strategy, depth, fun, and replayability make Legendary perfect for gamers and Marvel fans everywhere!